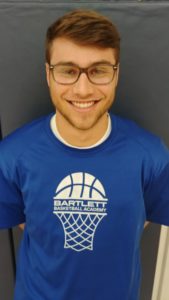 Coaching philosophy: Good defense leads to good offense. Make the game easier on yourself by getting defensive stops and pass deflections that lead to steals.

Coach Cole has been around basketball his whole life. He grew up watching the sport with his older brother and father. He instantly grew a passion for the sport he played in Salem, South Dakota, until he was a freshman in high school. Then, he moved to Sioux Falls and became a Tea Titan. He played for Bartlett Basketball Academy for two years. Right after graduation he knew he wanted to coach. He has been coaching for four years now, and Coach Cole still feels the drive to help players progress and loves making connections with the kids and watching them grow up.

Book a workout with Cole.