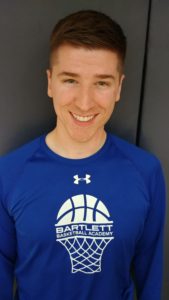 Coaching philosophy: Focus on the fundamentals to build a solid foundation for the skills of the game

Career Highlight: Seeing his teams improve from one season to the next

Coach Sean believes in teaching the game the way it is played, using small-sided games (1v1- 5v5) and then drilling out specific movements and concepts. He is a firm believer in focusing on the fundamentals to build a solid foundation for the skills of the game. He has been coaching for four years, and his highlight each year is seeing players improve from one season to the next. Coaching has reinforced his belief that if you put in the work, you will be rewarded with success. Coach Sean enjoys camping, hiking, stand up paddle boarding, and anything outdoors with his wife and two dogs. He also enjoys traveling and trying new things.

Book a workout with Sean.